How stand-up comedy is vastly different in South Africa from in the U.S.

Last night I finished the last of ten shows in South Africa. It’s been an amazing experience.
The whole country has only three comedy clubs, and I played them all. Stand-up as an art form is new in this country. The first comedy club opened only ten years ago. They had here-and-there comedy shows but not a real comedy industry.
People said that everything changed after apartheid- before that, they pretty much had nothing.

It’s interesting from a scholarly standpoint how comedy has emerged here. You’d think they would build on what’s already been invented in the U.S. and the U.K. But instead it’s like they’re starting from the beginning. 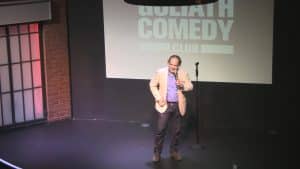 on stage at Goliath Comedy Club in Johannesburg

I probably worked with fifteen different comics at the three clubs, and I’d say that at least half the material was country-specific. The American equivalent would be that half of our jokes are about Trump, the Kardashians and McDonald’s.
(the difference being that the whole world knows about those three things whereas only South Africans would understand the SA-specific comedy and I had to have a lot explained to me).

In talking to one comic last night she explained that because of apartheid and boycotts SA was isolated from the rest of the world. So they became very insular. Even though that ended two decades ago the country is still very nationalistic.

And proud. Damn proud, among the people I’ve met, that they achieved freedom, albeit at the cost of maybe 100,000 lives.

Yesterday I was speaking to a German businesswoman who said that her office still seemed segregated. Not in the business sense but in who socialized with whom.

Her description, though, sounded kind of like America. That in general while people get along, their friends tend to be similar to themselves.

I did not notice that AT ALL in the comedy scene. Everybody seemed to get along and the groups of comics were more blended than I have generally seen in the U.S.

Conversations about race here are very open, and a lot of the comedy is on that subject. In ways that surprised me- white comics making fun of black and coloured people (note- that’s the term used here, without degradation, to describe people who are lighter than native Africans either through mixed marriages or as the descendants of Malaysians and other Asians brought here as slaves). Material that would get a white comic chased out of a club in the U.S. is acceptable here. Although I did notice that audiences have been mostly white, probably due to economics. Comics have been all races.

The thing that’s most amazed me is the lack of anger. The Truth and Reconciliation Commission pardoned anyone who admitted to their crimes under apartheid. In the Apartheid Museum there’s a horrifying 20 minute video of police admitting to their crimes in the same casual manner that’d you’d say yeah, I like ice cream.

I can’t imagine I could possibly have been that forgiving if I’d been oppressed like the majority of South Africa was until 1994. But even in Soweto people were friendly. Little kids want to high-five every white person they see, which is strangely fun. It’s kind of like when after a show audience members want to tell comedians how much fun they had, except in this case I hadn’t done anything except show up.

Performing there wasn’t easy. Some stuff that I thought was universal, wasn’t. Here’s a joke that does fine in the U.S. but got only blank stares in Johannesburg. It’s not a super-strong joke and I don’t know how it’ll play in writing but it’s decent and a good lead-in to some jokes about food:

The wine bar was full so I took my date across the street to the thrift store. For the price of two glasses of wine and a cheese plate I got her a lamp, two end tables and the entire Encyclopedia Britannica.
Note- I didn’t see any wine bars in SA so I changed it to bar, two beers and a small pizza.

Here’s another one that did okay but not as well as in the U.S.
My doctor put me on a thousand calorie a day diet. Said I could live to be a hundred. I said I’d better, I’ve already eaten all my calories through the year 2075.
When it didn’t kill I changed it from a thousand calories to 4000 kilojoules, since food packaging in SA is in kj. Still didn’t do great.
My guess? People there don’t diet like in the U.S. so the joke simply wasn’t something they could identify with.

Another joke I have, that’s about a two minute story, is making fun of people who send those braggy Christmas letters. My joke exaggerates things to the extreme and always does well in the states. In SA the audience simply said nobody sends braggy letters there, so they didn’t have context.

Before I went there I specifically asked if a Craigslist reference would work. I was told “Sure, we have Craigslist here.”
The joke fell flat. A comedian took me aside after my set and said “We have Craigslist but nobody uses it so it didn’t really resonate. We use Gumtree.com so just say Gumtree. “I changed the joke to gumtree and it worked for the rest of the shows. 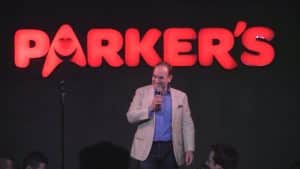 on stage at Parker’s Comedy Club in Johannesburg

Oh, one club owner told me that my self-deprecating stuff seemed to resonate the best. That was something people understood. Most comics there talk about SA lifestyle and current events, so anything that’s different has to stand out and feel like something they can relate to in their own lives.

I plan to perform in the U.K. and Australia in the next year or two- we’ll see how that goes. Should be easier since they get plenty of American comedians and I have colleagues who’ve performed there whom I could ask what I need to know.