Liberty Comedy at the Emelin Theatre

Ryan Reiss is a comedian, writer and actor based in New York City. Ryan began his career while attending college at NYU, and quickly became a favorite act on the scene. Ryan made his network TV debut on the Late Show with Seth Meyers.
Ryan’s quit wit, instant likeability and unique way of engaging any audience have made him one of the most sought-after comedians at the New York clubs and a favorite audience warm up performer. Ryan can be seen daily entertaining Fox studio audiences for the M&J Morning Show, Huckabee, CenterStage, on the YES Network and on Fox & Friends.
When not performing live, Ryan has been seen as a host on WE’s hit series Three Men & a Chick Flick, MTV’s TRL, Nickelodeon’s U Pick Live, Fox’s Red Eye, M&J Morning Show and Howard Stern Show. 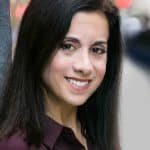 Ellen Karis is the “Greek Goddess of Comedy” and performs stand-up comedy all over North America. Born and raised in NYC in a traditional strict Greek home, her brand of sarcastic, observational humor is loved by all crowd types.
As an acclaimed actress, Ellen has worked in TV, Film and Theatre. She has been seen on Amazon’s “The Marvelous Mrs. Maisel”, Martin Scorsese’s “The Irishman”, Showtime’s “Billions”, NBC’s “Blacklist” and the Tina Fey/Amy Poehler feature film “Sisters”.
A former CPA who worked on Wall Street, she has appeared on many cable news shows, talk radio and Sirius XM. Her podcast available on iTunes “Karis Comedy Corner” has a weekly array of guests and has caught quite the buzz as a different and intelligent voice to hit the podcast arena. Ellen is currently working on her first humor book.